This Day in #Herstory: Domestic violence is not just a family issue 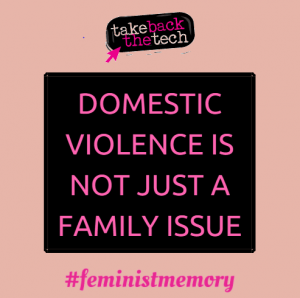 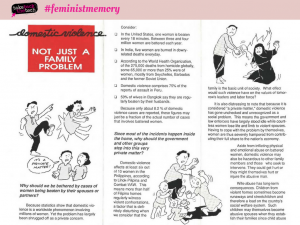 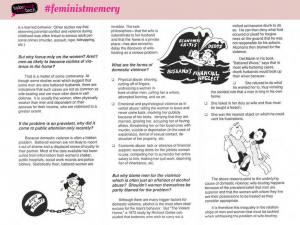 Domestic violence is one of the major manifestations of gender-based violence in the Philippines. With unequal power relations reinforced by political, socio-cultural, and societal structures, men continue to reinforce their dominance unto women, even with the use of brute and physical force resulting to gender-based violence perpetuated in the four corners of the home. Physical and sexual violence have been the most common forms of domestic violence; but because of our cultural norm of keeping quiet, silencing and/or shaming victims of such abuses, domestic violence does not seem to bring about the national upheaval that it deserves. Since it occurs in the private sphere, people do not want to interfere to what is considered in our society as merely a family matter. But where do we draw the line between a family issue and a issue in society?

Legal framework of the family is one influential factor that continues to delineate domestic violence as a family issue. The principle upheld in the Philippine Family Code that states that family is all important has been misused and misconstrued to continue the Filipino value of keeping family ties intact at all costs and all for the sake of the children’s welfare. It continues to purport a restrictive and boxed perception of marriage as merely a private matter between husband and wife, no matter how violent or criminal it is in nature. There is also the cultural aspect of giving maximum value and great weight to family’s honor that causes tolerance for violence against children committed by parents who have the right to use force to instill discipline. This misconception continues to silence the victims with grave pain; children’s suffering is sacrificed so that the family’s reputation will not be put to shame. Such pervasive influences in the Philippine society exacerbate the patriarchal structure in the country where the common description of a family is one that has unequal gender relations, with the man as the head and having supreme authority over his wife and children who is treated merely as his property to which he can do whatever he pleases.

More than a family issue, domestic violence is one that needs to be addressed for what is really is: a criminal act that, if not undertaken, knows no person, no place, and no time and perpetuates a cycle of violence. It is a political issue, where the aggressors are the brute force to be reckoned with by the innocent and the docile. It is an issue of human security, that continues to put women and girls’ safety and lives in danger. It is a gender issue, where men continue to reinforce a structure of patriarchy through misogynistic actions and behaviors even in the confines of their homes. It is a human rights issue that threatens human life and human dignity.

In 2013, the Philippine Commission on Women published a primer on VAW that provides basic information on what to do and where to seek help (Seehttp://www.sei.dost.gov.ph/images/projects/GADVAWflyer.pdf).
#FeministMemory #FeminstInternet #TakeBackTheTech

This article was written by Gen del Castillo, researcher at the Foundation for Media Alternatives. 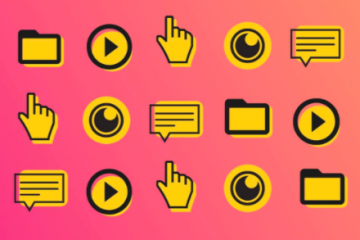