As people turn to the internet for work, school, and social activities, existing inequalities are also revealed in how people access and experience digital spaces. Women still continue to face violence perpetrated with the use of information and communications technology (ICT), which shows how online spaces are part of the continuum of gender-based violence (GBV) that has long disportionately affected women offline. Through the Take Back the Tech! mapping platform (ph.tbtt.apc.org), Foundation for Media Alternatives (FMA) has been able to map media reports of online gender-based violence in the Philippines since 2012.

Online gender-based violence (OGBV) ranges from hate speech and harassment to sextortion, privacy breaches, and identity theft, among others. Such acts are couched under Association for Progressive Communications’ definition of OGBV which are “acts that are committed, abetted or aggravated, in part or fully, by the use of information and communication technologies (ICTs), such as phones, the internet, social media platforms, and email”.

In 2020, FMA mapped 130 media-sourced reports – a 165% increase from last year’s total of 49 cases and the highest number of cases since FMA officially started data mapping in 2015.

The most prevalent cases that we observed were taking photo/video without consent (40.77%), sharing and/or disseminating private information (33.85%), and abusive comments (28.46%). There were also reported incidents on:

Mobile phone (65.38%) is the most common device used in perpetrating OGBV with Facebook (50%), and online chats (32.32%) as the widely used platforms. Videos (23.08%) and webcams (19.23%) were also among the technology used. OGBV was also mapped in other social networks (13.08%) such as Instagram and undisclosed web networks in cases of online sexual exploitation of children (OSEC). Aside from these, other devices and platforms (10.77%) were also used such as Google Drive, Zoom, PCs, and photo manipulation applications.

National Capital Region (NCR) has the most incidents of OGBV with 60 reports followed by Central Visayas with 17 reports while 10% of the incidents mapped had no information on location available. OGBV was also reported in Central Luzon (9.23%) and CALABARZON. OGBV incidence appears higher for regions that are more connected. Based on the latest available data provided by National Telecommunications Commission (NTC) and Philippine Statistics Authority (PSA) on number of cell sites in the Philippines, number of Internet Service Providers (ISP) per region, and number of households with access to personal computers and cellphones, the top regions are consistently NCR, Region 4A (CALABARZON), Region 3 (Central Luzon), and Region 7 (Central Visayas). In addressing concerns on work from home setup and e-learning, the Department of Information and Communications Technology (DICT) likewise boosted the Free Wi-Fi for All in 2020 which adds to Filipinos’ growing opportunities to the Internet across the regions. This expansion could grant more women the platforms to report their experiences. However, in the same convenience, this may also allow aggressors to use their connectivity in carrying out their violent agenda online.

In about 6 out of 10 cases (66.92%), the perpetrator is a stranger to the victim-survivor. In 87 cases (42.31%), the perpetrators are someone the survivor knows while 53 reports (40.77%) indicate that a group of people are involved in perpetrating the online abuse.

Out of the 130 reports, 56 were reported to law enforcements  and investigations were initiated by prosecutors in 33 cases. Survivors also sought the help of State offices specialised in VAW (24.62%). Others reported to the provider/platform (21.54%) and confronted the aggressor (20%). There were 10 reports (7.69%) of perpetrators being brought to trial.

While cyberviolence against women is higher, overall reports of GBV appeared to be in a downward trajectory during the lockdown period based on the cases reported to the Philippine National Police (PNP). There were 1,383 total reported cases of various forms of gender-based violence in January 2020 which then lowered to 804 reports in March 15 to April 30. However, reports increased again in June with PNP logging up to 2,246 reports of domestic violence against women. This follows the pattern in several countries where cases of GBV rise during times of crisis.

By December 15, FMA mapped a total of 130 media-sourced reports –  a 165% growth from last year’s total of 49 cases. This is also the highest number since FMA officially started data mapping in 2015.

Reports of OGBV also increased during the enhanced community quarantine (ECQ) period. ECQ and modified ECQ were implemented in Luzon island and later in select Luzon regions (including NCR) from March 16 to May 31, 2020. Reports remained elevated after May 31 which follows the pattern across multiple countries that GBV cases grow during periods of crisis.

ICT are being maximized to put COVID-19 measures in place and monitor viral transmission, disseminate information, and continue work, business, classes, and social lives. However, as technology is being developed to cater to human welfare amid the pandemic, the shift to online spaces has likewise given way to increasing and evolving forms of OGBV too.

For one, OSEC tripled during the lockdown period in the Philippines. Parents and guardians are among the perpetrators who continue to force children, including young girls, to perform sexual acts within the confines of their homes. Of the 130 OGBV cases, 21.53% were OSEC cases. These were mostly reported from the National Capital Region and Central Visayas. Various factors are at play in OSEC. Among these are the increased use of devices and internet as families remain largely at home, the ability to speak English and communicate to foreign customers, and the continuous search for income especially amid crisis when families are at risk of socioeconomic disadvantage.

Compliance with COVID-19 protocols does not fully translate to safety for women. Contact-tracing measures were taken advantage of to breach women’s privacy. Out of nine reports of data privacy violations, three were of women’s phone numbers in contact tracing forms being used by perpetrators to pursue them for personal reasons.

In 2020, cases of abusive comments still remain a challenge that platform providers and authorities need to address. Women who take their grievances on social issues to platforms such as Twitter and Instagram usually experience body-shaming, discriminatory remarks, and violent threats. Aggressions have been targeted at women who have relatively huge following such as female celebrities  Liza Soberano and Angel Locsin, singer Kakie Pangilinan, and Colourette CEO Nina Ellaine Dizon.

Cases that fall under ‘taking photos and/or videos without consent’ manifest in various ways. Photo-grabbing together with photo manipulation and false information are often seen in growing incidents of disinformation that are affecting “women with intersecting identities” as described by UN Women (2020). Women who hold both public and political life are often the targets of such. Multiple counts of disinformation follow Vice-President Leni Robredo and youth representative Sarah Elago, both of whom have had false information on them spreading online that say they support or are armed communist rebels (“red-tagging”). Out of 25 reports of deleting, changing, faking personal data, photos, or videos, 32% involved disinformation against female public figures and personalities.

Photo voyeurism goes beyond just the acquisition and circulation of photos. Another 25% were cases under faking of photos that were ‘morphing’. One case involved a woman from Cebu  who was messaged by a stranger threatening to release her nude photos but the materials were photos of naked bodies with her face edited on them. A beauty queen also sought the help of authorities to track and take down a circulating video of her edited to appear as if she were nude.

Video conferencing applications are also among those reported to have been used to perpetrate violence. ‘Zoom-bombing’ cases heightened women’s vigilance. Reports surfaced of Zoom meetings and Google Classroom sessions interrupted with flashes of lewd images.

The rising and evolving cases of OGBV are telling of the gender-based violence that needs to be continuously addressed. COVID-19 and its impacts only affirm that crisis response should always include gender-responsive measures. ICTs should also be taken into account as the same inequalities are pushed to online spaces. Manifestations of sexist culture and misogyny arise even in online platforms and in such national emergencies as COVID-19, gender-based violence spikes as people take to the digital world and carry with them the patriarchal attitudes that have long existed offline.

As women and young girls continue to use ICT, all the more that online platforms should be held to a standard of quality. The internet, while a vast network that is useful for marginalized groups, is not exactly safe as it is also a space where violence can be committed and further pushes women to the margins. Citizens play a huge role in the fight for a VAW-free Internet and so do institutions and platform providers. In pursuing online safety while making the internet a productive tool, the experiences of women and young girls should be upheld and used to create a digital world that is empowering for everyone. # 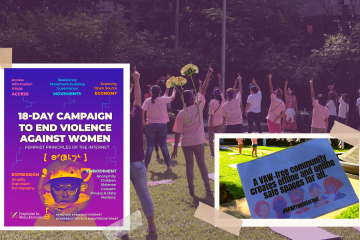 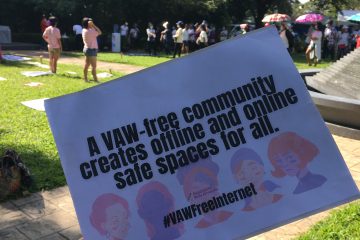 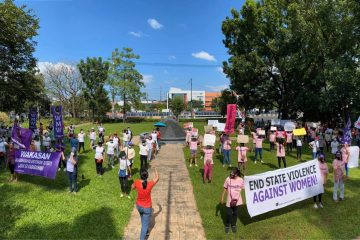